Our plans this year have been constantly changing due to the heat and fires in Oregon. We chose hosting this summer since so many campgrounds ae closed and many more people camping making finding last minute sites difficult to find. We hadn't previously volunteered in Washington and didn't know what to expect.
With a lot more last minute openings this year for camp hosts, we saw a last minute opening at Lake Wenatchee State Park for a camp host as we left Fort Stevens State Park on Oregon's coast. Lake Wenatchee is 20 minutes north of Leavenworth, WA in the middle of the national forest and North Cascades. 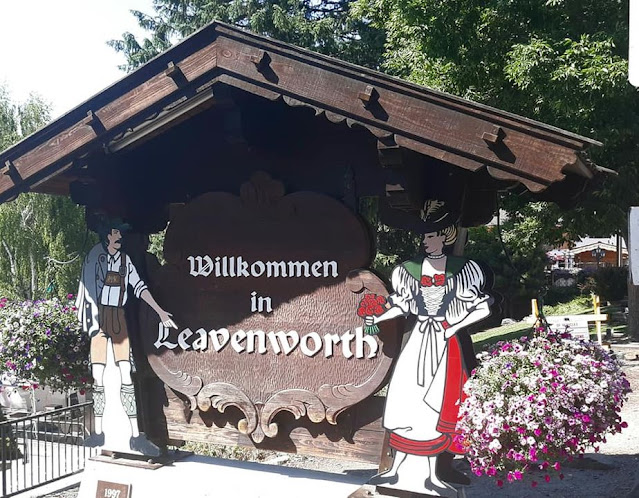 Leavenworth is a Bavarian Village style town with an annual Bavarian Christmas celebration and one of the largest Oktoberfest celebrations outside of Munich. It offers up a little slice of Germany in the center of its Pacific Northwest landscape and nearby Alpine Lakes Wilderness.
The novelty of visiting Leavenworth wore off pretty quickly during our weekly trips to Safeway and running into traffic jams of tourists. Our plan to have a nice German lunch out quickly turned to burgers at the drive up burger place on the edge of town. 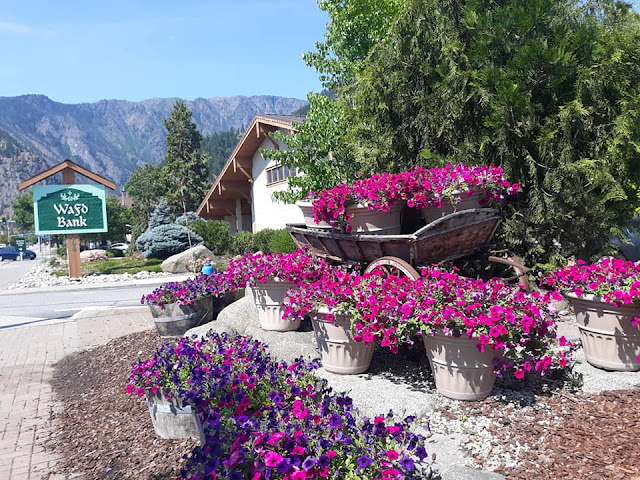 Lake Wenatchee State Park is a 489-acre camping park with glacier-fed Lake Wenatchee and the Wenatchee River.
During their annual migration long ago, Native American tribes stopped at Lake Wenatchee for a feast of clams and salmon before heading west to trade with coastal tribes. 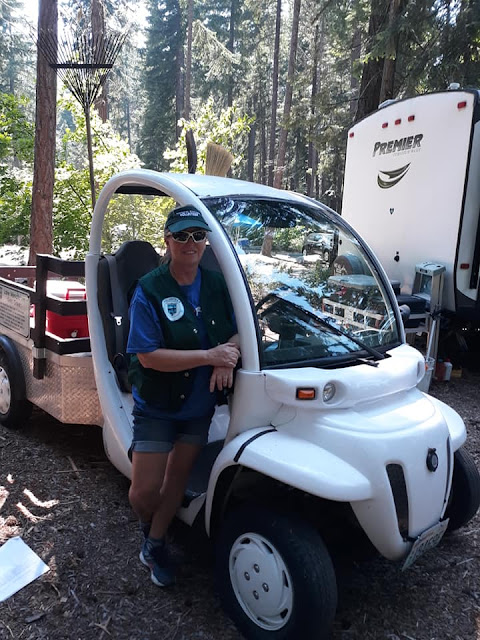 Ready for work in our little Gem electric vehicle. 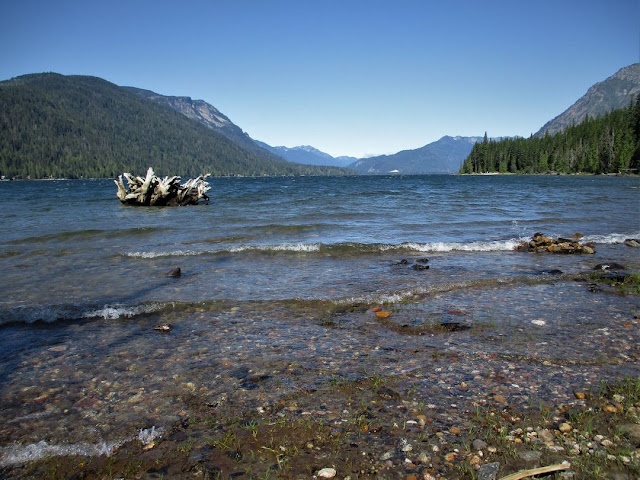 The North Loop has room for larger RVs and we were in the South loop with 100 sites for small RVs and tents on the south side of the Wenatchee River. Our site overlooked the swimming area and had a nice breeze across the lake on warm days which kept most of the pesky mosquitos at bay. Both campgrounds had peaceful walking trails. 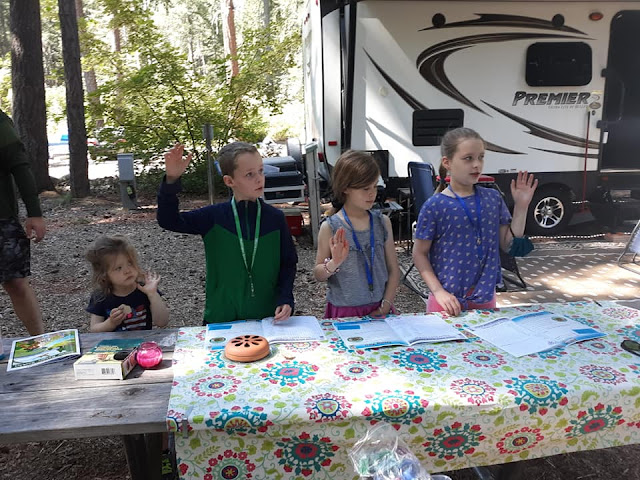 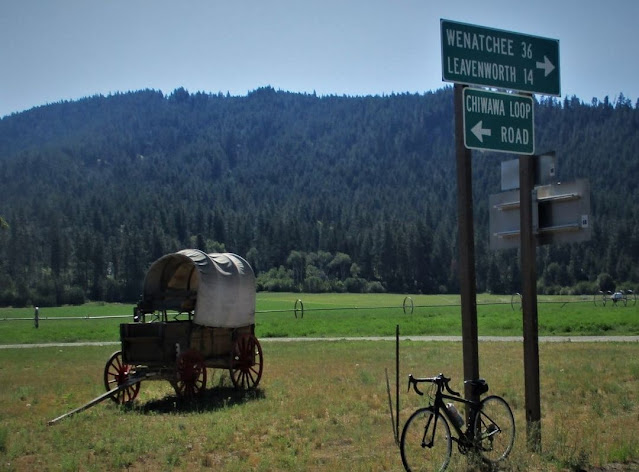 Our cycle route was 7 miles to Plain and the Chiwawa Loop. The small "town" had the Just Plain Grocery, Just Plain Laudromat and Plain Hardware which turned out to be a boutique and coffee shop with hardware in the back. 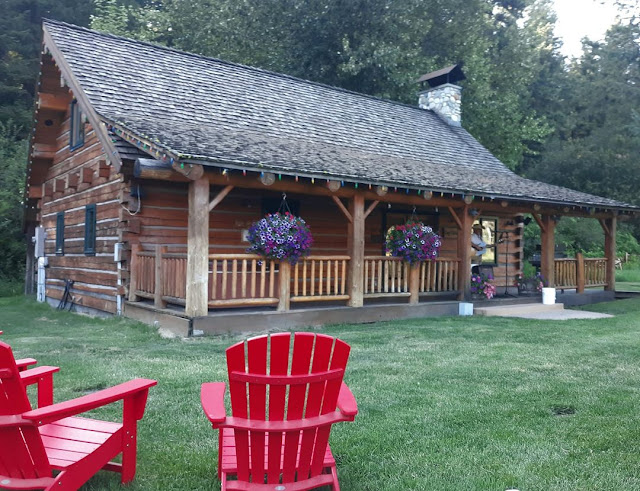 We saw a banner at a resort on our return ride from Plain with Friday night music and tacos. A gal saw us dancing and asked me to two step with her since no one else was dancing and Mike was getting tacos. That was in between "mask off, mask on". 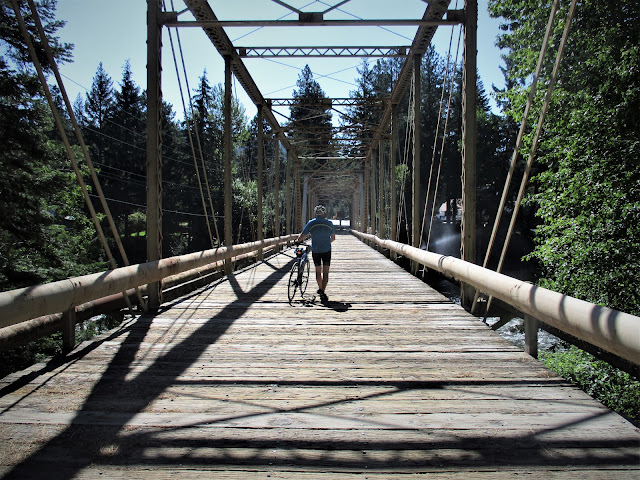 A bridge too bumpy to ride. Made my teeth chatter. 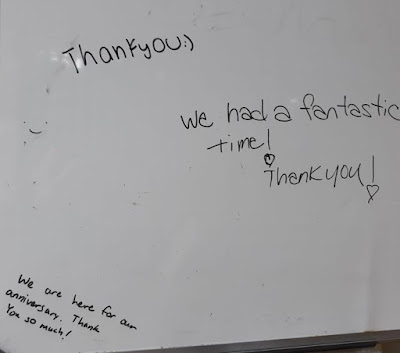 Happy campers leaving a message on our wood shed white board. 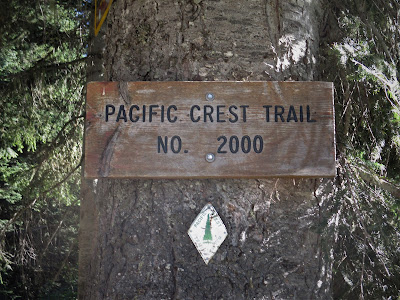 The most difficult stretch of PCT in Washington, Section K puts hikers through a grueling 127-mile trek (a long ways between resupplying) over harsh terrain and treacherous conditions are rewarded with
a true wilderness experience in and among some of the country's most pristine and beautiful surroundings. 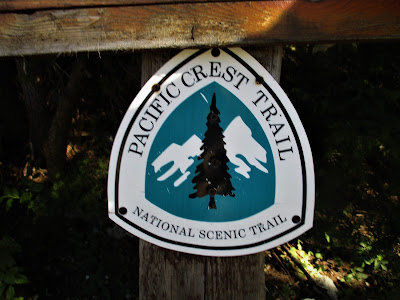 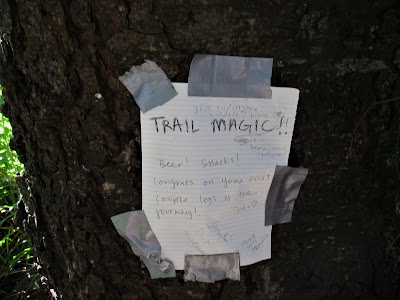 We headed out with our packs of "trail magic" (breakfast bars) on an easier 3 miles of this section. It wasn't long until we met a couple of south bound hikers that said they were headed to Mexico. I whipped out a couple of bars. They looked so happy and said they had run out of food and were so thankful.
They weren't far from the highway and planned to hitch a ride to Leavenworth. We found the diner in Coles Corner that many through hikers stopped at, much closer with some really good food and had been featured on Diners, Drive Ins and Dives. Hikers that we had seen while out on the trails would stop and visit with us. It was amazing how much food they could put down. 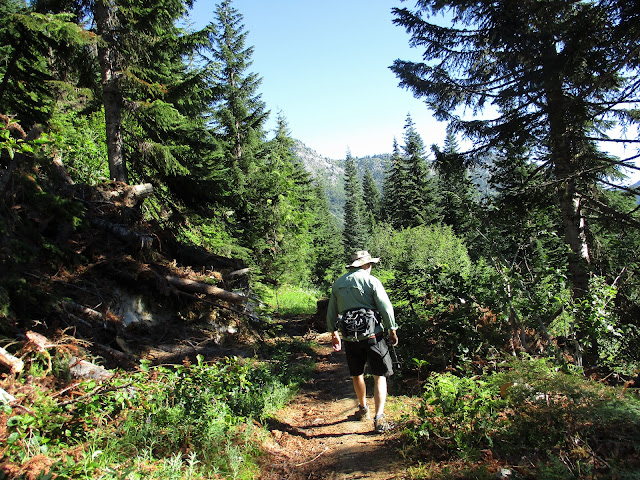 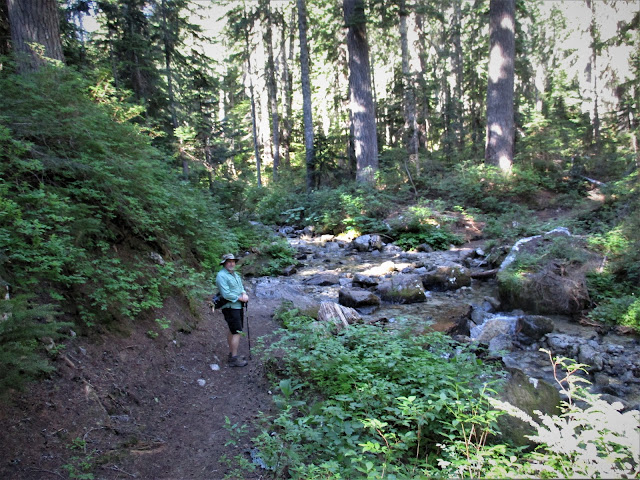 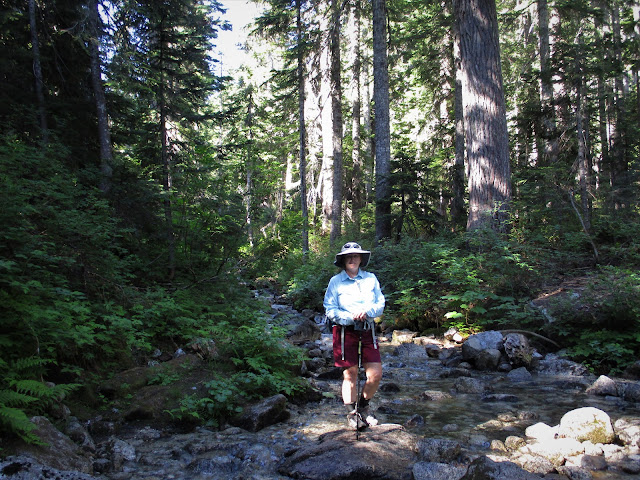 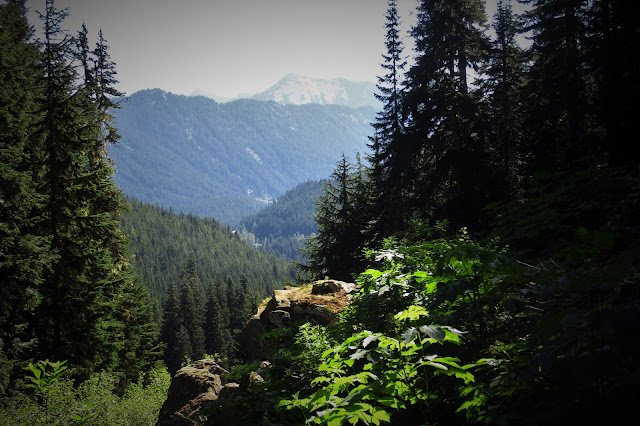 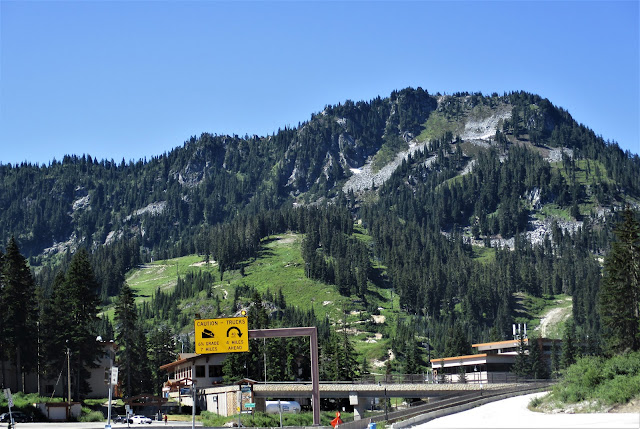 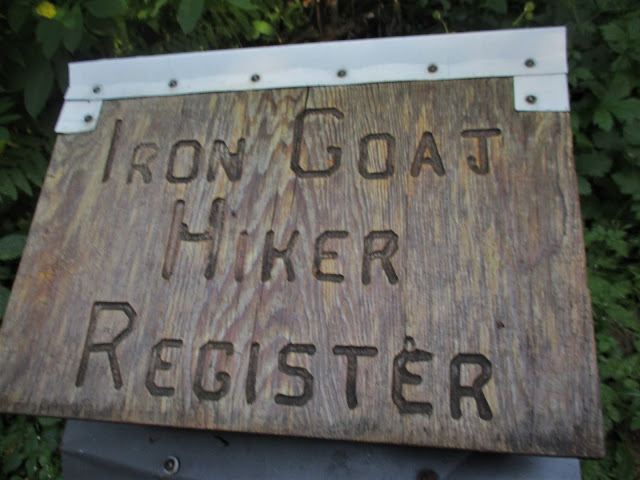 The Iron Goat Trail is a walk along the old Great Northern railroad grade built over the Cascades in 1893. At the time it was built, it was considered the best engineered of the transcontinental railroads, taking us on one of the intricate switchbacks that once took trains up the Cascades Mountains. 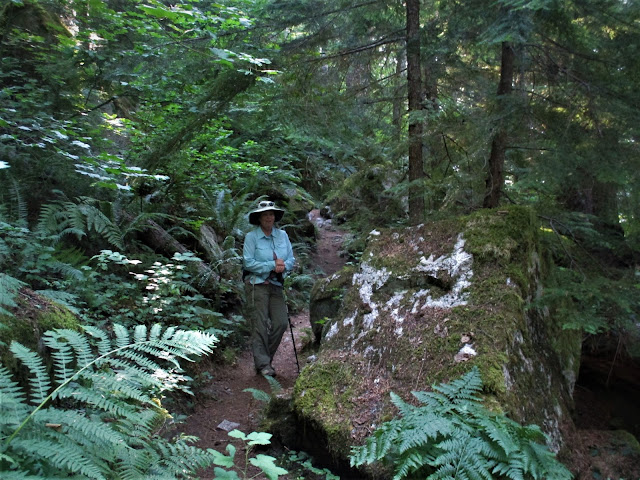 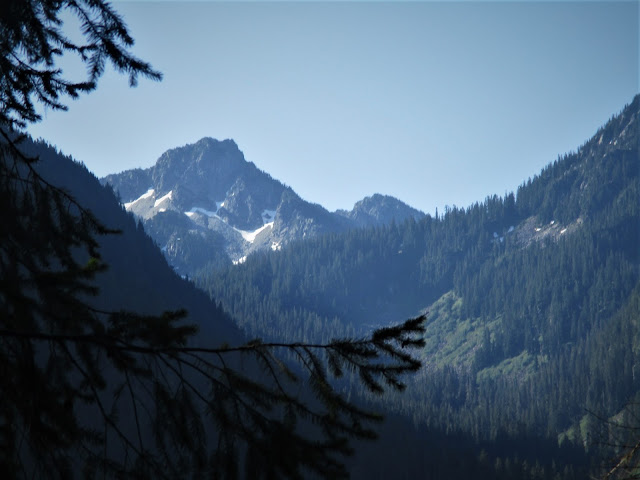 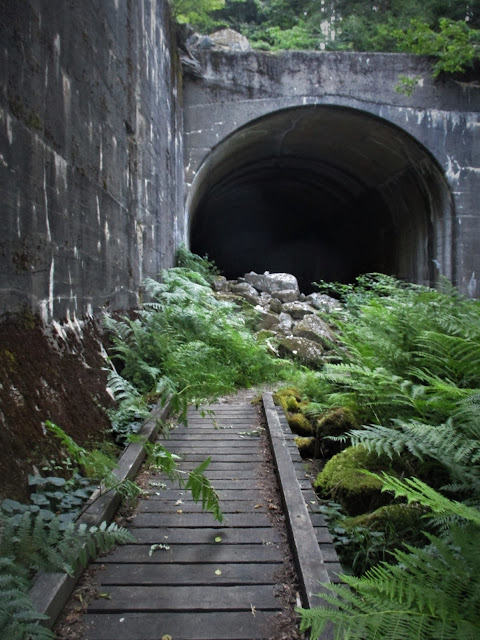 There were small waterfalls and several old tunnels with trails going up to the openings. We took the steep counterclockwise direction and were pretty warm when we reached the first tunnel.
The breeze was cool as we entered it. I thought we should just stay there. Many of the tunnels and snow bridges were built by 800 workers — many
Japanese immigrants — who laid the train tracks across the Cascades through Stevens Pass. 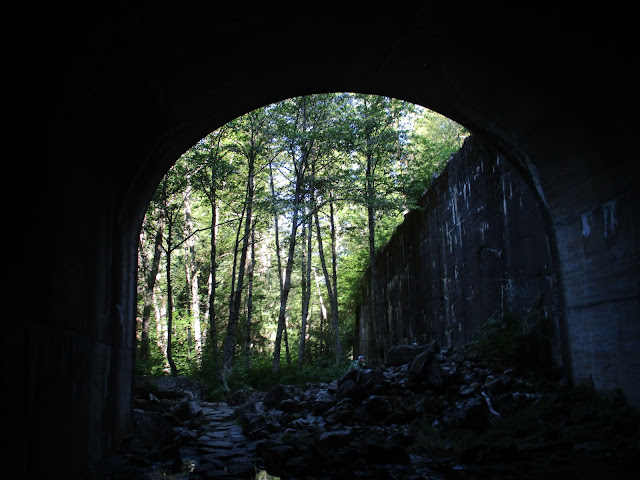 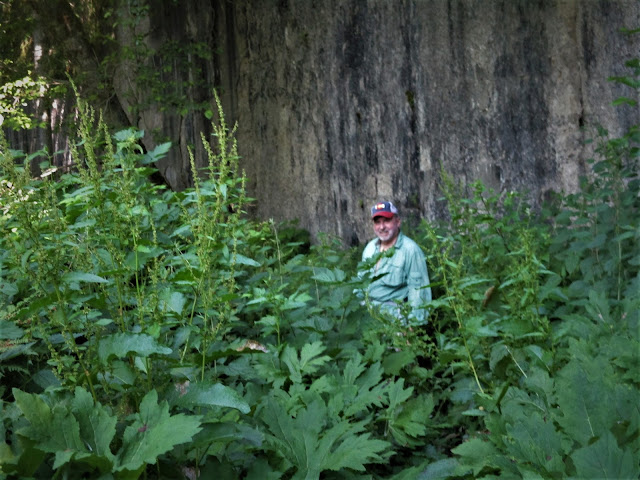 I know there is a trail somewhere around here. 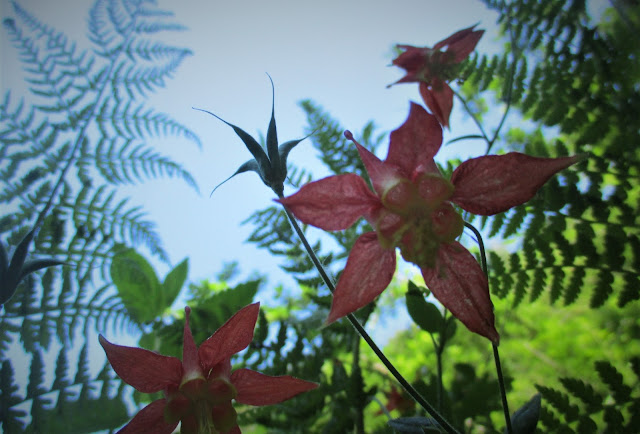 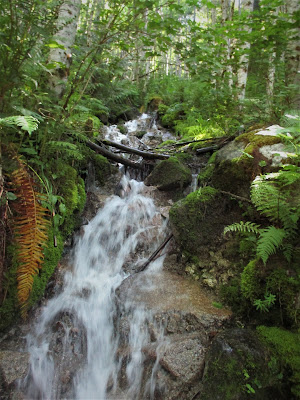 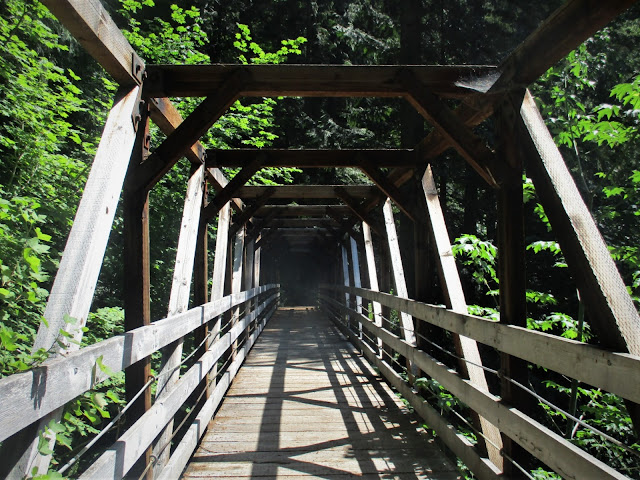 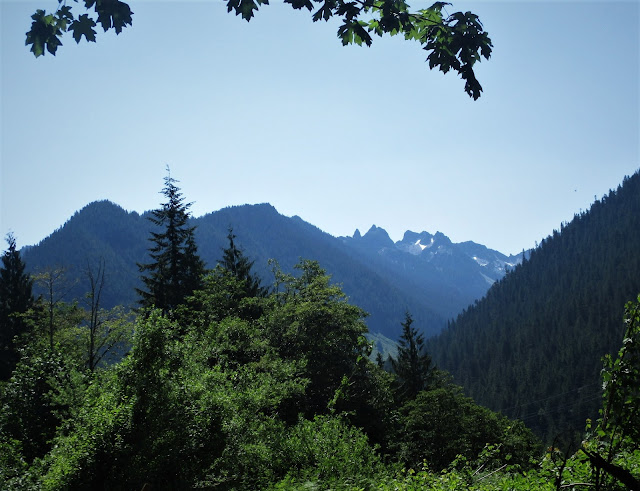